A Goldilocks-style analogy for writing the Methods section of a report or paper.

Some years ago, I noticed that students often struggle with what to include in their methods section, particularly when following a tutorial or guided lab. I did this up as a slide deck initially, but thought it might be more accessible in this format.

First, I selected a clean bowl from the cabinet.  It had a little speck of something on it, but I removed it with my fingernail. Next, I ripped the top off the packet of oatmeal and poured it into the bowl.  It’s important not to spill any on the counter. Then, I added a half cup of milk to the oatmeal and stirred it with a spoon.

Take a bowl of oatmeal and add milk, then microwave it.

I began by adding the contents of the oatmeal packet to a clean bowl. Then, I added a half cup of milk and stirred it.  I microwaved it for two minutes, stirring at the halfway point.

I allowed the oatmeal to cool slightly before eating it.

NB: if the material of the spoon, or the power of the microwave, or the brand of oatmeal is relevant to your process, by all means include it. Also, if your methods are derived from someone else’s methods (grandma’s recipe, etc.), you should cite that.

For several years now, I’ve been using Esri’s ChangeMatters site to help students get an early taste of the power of remote sensing.  They get excited about the ways in which we can use the long history of satellite imagery to do science, and, let’s face it, look at cool pictures of the earth.

For those who haven’t tried it, it looks like this: 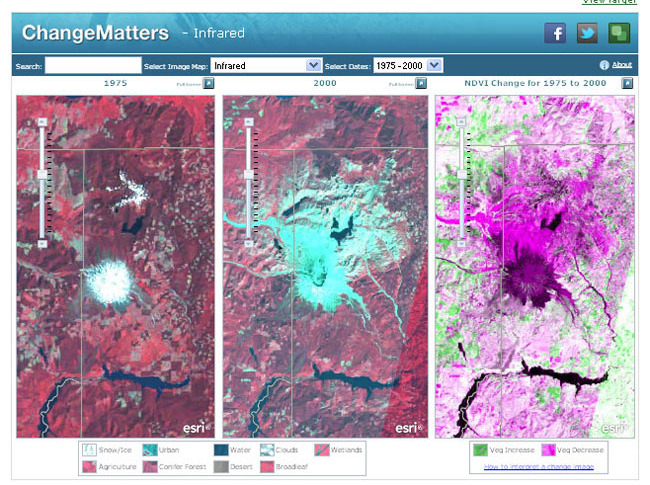 You simply choose a date range, and an image type (IR, true color, etc.), and watch the magic happen.  The third pane displays vegetation change.  You can move the map in any of the panels, and the other two update.  My students are tasked with finding a place of interest to them, noting the changes, and then doing a little digging to find out what event(s) caused the change they see.

So this week, I trot out my trusty assignment, and students immediately let me know that the site is redirecting them to something else that doesn’t seem to do what I’m asking them to do.

For my purposes, since I wanted students to look at images side by side, I chose the Landsat Explorer option.  It features the Swipe interface, which I didn’t see in the Viewer (if I missed it, apologies, but I was trying to quickly push out new instructions for my class).  Here’s the quick and dirty update I cobbled together for my students; hopefully it will help some of you who have suddenly discovered you need to update your assignments as well.

If you are using the old link, and get redirected, click Try it live, then select Landsat Explorer.

The new link is http://landsatexplorer.esri.com/.  (If it takes you to a story map, scroll all the way to the end until the toolbar pops up on the left.)

Unfortunately, this site seems to have a less complete image set, so you may have to do a little exploring to find a place that has imagery for multiple dates.  If you’re not finding stuff, try setting the cloud filter a little higher (not too high, or you’ll get nothing but clouds!).

Spend some time exploring, then continue on with the activity prompt.

Projections are a hard concept for students.  Fundamentally, they understand that to represent the round earth on flat paper (or a flat screen), something’s got to give.  We talk about developable surfaces, and distortion, and why it’s important to project data layers correctly for analysis and visualization in our foundations course, and in almost every course after that, there are a number of students who still seem to miss the point.

“But my GIS software just draws everything together, regardless of projection, so why does it matter?”

“But I projected my data, why does my map still look wrong?”

I will never have the deep understanding of projections that my NACIS colleagues Bojan Šavrič and Tom Patterson wear like a badge (or at least a t-shirt).  But projections are a fundamental part of what we do as spatial researchers and cartographers, so everyone needs to know at minimum that choosing the right projection is important to measurement, navigation and aesthetics.

How do we teach students about projections and why they matter?

There are some fun videos out there that cut up globes, or flatten oranges, which gets them thinking about the challenges of representing the round earth on a flat surface, but not so much about the distortion in a specific area.  Others have projected the human head in multiple ways, to help them understand the distortion, but mostly students wonder why the heck you’d do that, because they are obviously all wrong, rather than understanding the relative strengths and weaknesses of each projection.

They seem to get the idea that distortion happens, and that we mainly want to control it in our area of interest (also known as making it somewhere else’s problem).  But they’re not quite to the point of making a solid connection between why you’d use one particular projection over another.

How do we get students to think about choosing the right projection for the job?

This is a trickier question, and I’d love to hear what the rest of you are doing.  I used to use one that outlined a few scenarios for students to create a basemap (e.g. need a map of the Andes region that preserves shape, or need a map of the contiguous US that preserves area), and have had mixed results.  Often, students are trying to use projections designed for the whole world, and then just moving a central meridian or standard parallel.  Not unworkable, just not ideal for areas smaller than a continent.  Recently, I switched to a small multiples version, using the same country (China) throughout, and having them thoughtfully compare 6 different projections, modified for that part of the globe.  Initial results look promising, but we’ll see if that carries forward into other assignments where they have to decide for themselves how to flatten that part of the earth.

We have some fantastic students who come through our program and win awards and go on to do great things with maps.  But I want to reach a larger percentage of them, and I want to stop looking at maps of the US in Web Mercator.

I understand if you nodded off somewhere in the first paragraph.  If you made it this far, thanks for reading what amounts to a little bit rant, a little bit call for help.   I’d love your thoughts on how you teach projections.

Here are some resources I’ve been sent since posting this (more as they are suggested):

A nice post (with hand-crafted artwork!) on coordinate systems, with a side order of Plate-Carrée, by Lyzi Diamond

It’s the start of a new year, when we’re supposed to start new things, right?  Okay, technically we’re in the second month already, but the first weeks of the semester are always a little hectic, so here we are.

I’ve been encouraged by my peers to get a blog going about things related to the way I teach cartography, common things students struggle with, etc.  There are lots of great blogs out there on the general condition of maps, some insightful (and sometimes pithy!) critiques, and some that are just showcases for maps old and new, good and bad.

Here are a few of my favorites:

(this list could go on for days, so I’ll just stop now and mention others as they are relevant to the topic at hand)

This is not one of those blogs.

For starters, all of these people have spent time and care choosing a blog template that works for their style, and in some cases is a work of art in itself.  After months of browsing templates in a deliberate attempt to delay starting this process, I have elected to go with a pretty basic look.  Clean, we’ll call it.  Classic.  Yeah, that’s it.

My intention here is to share some of the challenges faced by novice cartographers, and hopefully some good advice for others out there who are transferring this time-honored skill to others.  In particular, I want to create a subset of posts specific to using ArcGIS Pro, as using that software in a lab setting is very different than using it on your own machine.

So welcome, and I hope you’ll drop in occasionally.  If you’re a fellow educator, I look forward to your responses to future posts to see how you do things.